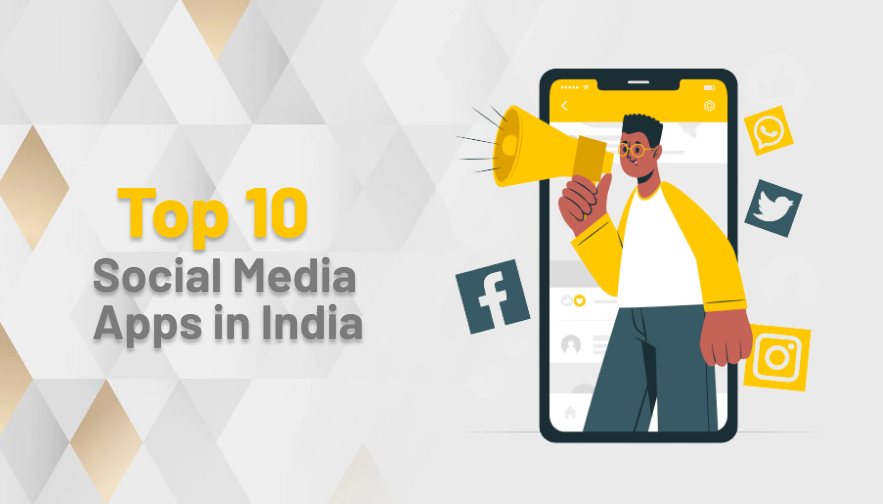 Social media has now taken over the world. All of our work is now somehow related to them, whether it is entertainment, communication, or even shopping. They have been around for a while, but because of cheap mobile data and smartphones, their popularity has now skyrocketed, and more and more people have started to use them. You can contact our social media marketing team for all Social media marketing services.

This blog will provide you with data on which applications are more popular in India and why they are gaining popularity. We have prepared a list of the top 10 applications based on their number of Active users.

Facebook was launched in 2004. It originally started as a simple social networking site, then it evolved into the gigantic marketing machine that we know today. A key feature in its popularity was that it was unique at that time and was easily accessible. That means that you just need a device and the internet, and you are good to go.

You can post text, pictures, and short and long videos on it, which can be viewed by your friends and family. If your profile is not private, then your posts can be viewed by millions of people, and you could become famous too.

This is why almost all brands sell or display their products on Facebook in order to attract more people to buy their products. And that is why you could say that it has become indispensable for the success of a brand in the digital space.

ShareChat is a social media platform that is based in Bangalore, India. It was started in 2015, and now it has more than 1 billion active users in India. Its popularity stemmed from the fact that it allowed users to share their thoughts, and videos, document their lives and make friends in their native language.

When you compare its algorithm to another social networking application, it allows its users to connect through private chats by locating those who share their interests. That may be the primary reason behind their success. They have a strong audience based in non-metropolitan cities, which is where most of the Indian population is from.

In this list, LinkedIn is the only application that is not for users’ entertainment. It is a professional social networking site that does not concentrate on pictures and videos to entertain you.

It is an American application that was launched in 2003 that focuses on job-related services and can be accessed through either a mobile app or a website. In this application, job seekers can upload their resumes, employers can post jobs, and they can meet.

Now that the application’s core is the same, it has a new feature where users can share images and videos too. However, the content is mostly related to jobs and involves educational material, so you can also learn new skills through it or get industrial tips and tricks.

Since smartphones are becoming more accessible in India, the popularity of WhatsApp is also increasing. It has now become a virtual hangout place for families and friends.

Millions of Indians use this application for sending messages, jokes, and news, all of which are in the form of text, images, videos, and gifs. Lots of offices also use it for communicating with their clients because WhatsApp allows its users to send documents and all kinds of stuff. All of the messages in WhatsApp are end-to-end encrypted, which makes it safer to use.

Initially, it was a one-to-one photo-sharing application, but now it allows users to share their photos with all of their friends at once with a feature called stories. It also has a feature called “discover,” through which users can explore and see new accounts, and brands can use them for advertising purposes.

Twitter is a microblogging application that was launched in July 2006 and allows its users to share their thoughts in the form of tweets. Those tweets can be read by thousands of people if they are public. They can react to those tweets; they can like, retweet, or comment on them.

Twitter now allows users to share videos and photos because it has almost all of the celebrities on its application. They want to express themselves, and normal users also need to share their thoughts with the help of images and videos.

Instagram is a photo-sharing social media platform that was founded by Kevin Systrom and Mike Kreiger in 2010. Later on, as it started to get more and more popular, Facebook acquired it.

People were using this application to interact with each other using images, but now users can share videos, and short videos called reels, and they also have a feature that can be viewed only for 24 hours in their story section.

Instagram has made hundreds and thousands of people famous, and with their Instagram accounts, they are making a living out of it. They are called “influencers,” and influencers who have more followers of the brand are willing to give them more money to endorse their products.

Telegram is a messaging service that was founded in 2013 and has its headquarters in Dubai. The reason behind its popularity is that it allows users to send files up to 2 GB. That field can be pdf, word, or video.

They have features for chats, video calling, file sharing, and other things, and all of them are end-to-end encrypted, so users do not have to worry about their information being leaked. Because alternative massage application data was being leaked, Telegram was considered the safer option.

In this application, users can create short videos with the help of filters, emojis, and stickers. Its parent company is ShareChat, which has dominated the market because of its multilingual feature. So they have added a similar feature to this one too. You can use this application in 15 different languages.

Pinterest is an American image-sharing application that was launched in 2010. The primary aim behind the design of this application was to enable the saving and discovery of information and ideas in the pinboards. You can find ideas for DIY projects, fashion, recipes, and more.

When you find aesthetic images on Pinterest that are helpful for you, you can save those images and also create image boards with multiple collaborators. If you want to share your content on this application, keep in mind that most of the users browse it on their mobile phones.

What are the best social media applications in India?

Here is a list of the best social media applications in India:

Who is considered to be the “Big Three” of social media?

Which social media is best for making new friends?

When it comes to making friends, Facebook, Instagram, Snapchat, and Twitter could be the best platforms for you to make new friends. However, we advise you to be cautious, because there are a lot of people who just want to scam you.

Who is the most followed person on social media?

Cristiano Ronaldo is the most followed person in the world, with 513 million followers.

Which social media company generates the highest revenue in the world?

Meta is the revenue leader, with $118.115 billion in revenue last year.

6 Reasons Why You Need Digital Marketing for Your Business Growth

How can Digital Marketing Transform your Business?